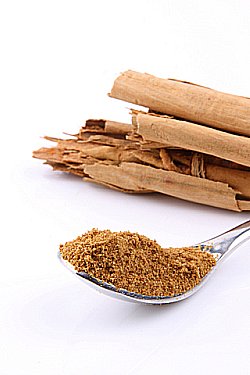 Cinnamon and weight loss, how and why do they go together?   What a difference this simple little spice can make.

It's not a drug, it's not expensive and it can improve your health.

You can help to stabilize your blood sugar and lose more fat just by adding cinnamon to your tea or a glass of water every day.

As a matter of fact, the Journal of Diabetes Science and Technology has been reporting on the beneficial effects of cinnamon for reducing the symptoms of diabetes and cardiovascular diseases since 1990.* More recently in 2006 a study was reported demonstrating that when consumed for 12 weeks cinnamon was shown to increase lean body mass.*

It should be noted that cinnamon is a compound granted GRAS (Generally Recognized As Safe) by the United States Food and Drug Administration.

Richard Anderson, a researcher with the USDA Agricultural Research Service who has done research on cinnamon for 20 years, states that water extracted cinnamon is non-toxic at any amounts.

There are many spices and herbs that have been shown to control blood sugar but cinnamon has 20 times the capacity to positively impact factors associated with metabolic syndrome, insulin sensitivity, blood sugar, antioxidants, inflammation, blood pressure and body weight.

These  are all factors associated with type 2 diabetes.   A diabetic diet plan could benefit from adding this spice.    It makes sense to use a spice commonly used to flavor foods if it can help to manage these symptoms and your weight.

When your body consistently gets too much insulin, insulin resistance occurs which is a condition that characterizes pre-diabetes. When you have chronically high blood sugar, sooner or later you will have a test that shows that you have abnormally high levels of insulin in your blood stream.   Scientists are now calling this phenomenon insulin resistance or metabolic syndrome.   Metabolic syndrome means you are in a hormone nightmare.   Your hormones have  gone awry.

There is a remedy for this and it is not a drug.   It is a spice along with a low glycemic eating plan.

According to a study published in the Journal of the International Society of Sports Nutrition in 2006*  it does.    It was shown to lower blood sugar, triglycerides and cholesterol and increase insulin sensitivity.

The conclusion was that it improved body composition in men and women with metabolic syndrome and suggested that cinnamon can reduce risk factors associated with diabetes and cardiovascular diseases.

Studies demonstrate that cinnamon lowers blood sugar, lowers triglycerides and cholesterol and increases insulin sensitivity without any nasty side effects.


Cinnamon and weight loss and improved health go together because increased insulin sensitivity is essential to manage your weight and have good health.    When you eat to support your health with low glycemic whole grains, fresh fruits and vegetables,  good quality meat and good fats you will be on the right track.   Cinnamon is a perfect spice to add to your low glycemic eating plan.

What does this mean for cinnamon and weight loss?

Since the most effective way to lose weight permanently is to lower your blood sugar and increase your insulin sensitivity, it means that cinnamon could be a significant support in controlling your weight.    So it will make a difference to  eat low glycemic foods and you can also consider adding cinnamon to a beverage before each meal.

When you eat primarily low glycemic foods you are sustaining low blood sugar levels because these are foods that do NOT raise your blood sugar.    Walk or exercise daily because this also lowers your blood sugar. And drink (or eat) your cinnamon.    You can add cinnamon to your oatmeal or sprinkle it on fruit and yogurt.

Have some cinnamon before 2 meals a day.   It's after a meal that your blood sugar is highest.   If you have eaten a low glycemic meal the cinnamon will be able to act in a healing way to bring about greater insulin sensitivity.    It will reduce the blood sugar effect of the meal.    This is why cinnamon and weight loss go together and if you follow a low glycemic eating plan and exercise daily you will greatly increase the likelihood of achieving your weight loss goals.

There was a study published in “Phytomedicine” in which researchers found that the active ingredient in cinnamon caused blood sugar to drop by as much as 63%.*

Since cinnamon increases insulin sensitivity it mimics all the positive effects of insulin.

It triggers the uptake of glucose and other lifesaving nutrients from the blood by a process called phosphorylation.*

Eating a little cinnamon with a meal is not the end of the story by any means. Cinnamon and weight loss are connected by a web of other favorable factors.    You cannot eat cinnamon and eat a high glycemic diet and never exercise and expect the cinnamon to do all the work.

Cinnamon will be a powerful support but it needs a context of favorable actions on your part to make it work effectively.    Print out the two glycemic index lists of foods.    Eliminate high glycemic foods from your diet and eat a little cinnamon with 2 meals a day to control the glycemic response.

The cinnamon used in the studies is the one you find on the shelf in your grocery store. It's super cheap! It increases your insulin sensitivity! Happily, this is an easy and inexpensive way to experience for yourself how cinnamon and weight loss are linked.

For more articles regarding your blood sugar and fat loss please scroll down.

*2 Journal of the International Society of Sports Nutrition. 3(2):45-53, 2006. "Effects of a Water-Soluble Cinnamon Extract on Body Composition and Features of the Metabolic Syndrome in Pre-Diabetic Men and Women."

Are you at risk for type 2 diabetes?

This is a safe, natural fat blocker that really works to burn fat effectively.

How To Stop Sugar Addiction

Are you addicted to sugar? Learn how to stop those cravings.

Do you think you have metabolic syndrome? You can take steps to correct it.

This is where you'll find an intensive, low glycemic program to reverse your insulin resistance.

This is all the diet information you need for your Lifetime Fat Loss Low Glycemic intensive program to overcome insulin resistance and get healthy again!

What are the causes of high triglycerides? Probably not what you think .... you have control and can make these changes.

Return from Cinnamon and Weight Loss to Managing Type 2 Diabetes.