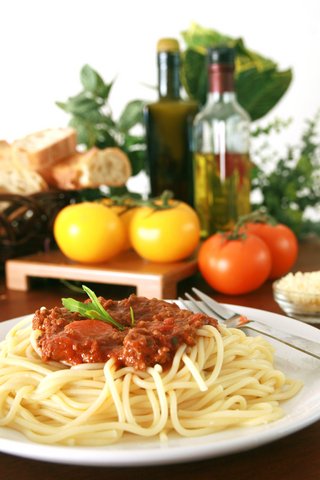 This is a low glycemic, spaghetti sauce recipe which is the ultimate healthy fast food for a family when you put it over low glycemic, high protein pasta!

Look for the Barilla Plus brand in a yellow box because this pasta has the lowest glycemic index. The recipe below is the secret to it being a quick, easy and low glycemic meal for your family.

Making a large batch takes the same amount of time as making one dinner and you can make enough for 3 - 4 meals. Freeze it in quart containers so you can thaw just enough for a meal.

For your conveniece this is one of our printable low glycemic index recipes.

If you work, make the spaghetti sauce on the weekend and you will have two healthy meals put together with low glycemic carbs already made for the week.   The sauce will keep in the refrigerator for up to four days so only freeze it if you make more.   Now just boil your noodles al dente and make a salad!

This is a fast version of a classic Italian tomato sauce when you use canned, diced tomatoes instead of fresh ones.   Of course if you have more time use fresh.   Fresh tomatoes taste fabulous in this.  I usually use the fresh tomatoes in the summer when I have a big home grown crop of tomatoes.

This fast version spaghetti sauce recipe saves a lot of time and tastes almost as good. There are many varieties of canned, diced tomatoes on the market but I like the ones with roasted garlic or basil added.   If you have hearty eaters, brown 1/2 lb. - 1 lb. of hamburger separately depending on how much sauce you are making, drain well and add as the last ingredient.   Use about 1/2 lb. hamburger for the recipe below and double as needed.

Heat in a large skillet over medium heat:

Stir and cook for 5 minutes.

Stir and cook for a couple more minutes.

Optional: 1/2 lb. of hamburger that you have cooked separately and drained.

Add the hamburger if you are using it and the rest of the ingredients except for the Parmesan. Simmer for at least 10 minutes uncovered while you are boiling high protein (Barilla) pasta noodles. Top with grated Parmesan that you buy as a chunk of Parmesan cheese.

Don't buy the already grated Parmesan in a can because it has high glycemic ingredients. The whole Parmesan is a little more expensive but it lasts well when refrigerated and you don't need much per meal.

Half of this recipe would go over 8 oz. of pasta which is enough for four people. The rest you can refrigerate for a few days for another meal or if you've doubled the recipe you can freeze the rest in separate quart containers.

All pasta is low glycemic, but the Barilla is higher protein which makes it the lowest glycemic index.  Whole grain pastas including quinoa pasta are also good choices.

There you have it, a filling spaghetti sauce recipe made with low glycemic pasta that will give you a nutritious meal for several nights!